SCHEDULE AND RECENT NEWS IS ON FRONT PAGE

And the Heavens Were Made

Throughout the course of the history of Holy Mother Church we have been told that Catholics do not believe in scientific facts or, more recently on our calendar, one cannot believe in God and science, too. Neither of these statements is true. As a matter of fact, MANY scientific proofs and understandings have been brought to the world by the Catholic Church; more specifically by Catholic priests.

One such priest is Father Georges Lemaître, a Belgian priest and cosmologist. Cosmology is a branch of astronomy that studies the origin and the evolution of the universe. Fr. Lemaître was born in 1894, excelled in math and physical sciences, earned a degree in engineering but ended up fighting in WWI before working in the field of engineering. After the war he continued his science studies, wrote brilliant papers, earned degrees and awards, and in 1929 was ordained a priest.1

In 1927, one of those brilliant papers was a manifesto whose title proclaimed that the universe’s mass is constant, but its radius is increasing, causing its galaxies to move apart.2 Seriously? The universe is expanding? He seemed to think so and had the science to prove his theory. That paper was translated into English and astronomers all over the world were convinced Lemaître was correct; the universe does, in fact, expand.

Why is this important to us? In 1931 Fr. Lemaître explored the logical consequences of an expanding universe and boldly proposed that it must have originated at a finite point in time. If the universe is expanding, he reasoned, it was smaller in the past, and extrapolation back in time should lead to an epoch when all the matter in the universe was packed together in an extremely dense state. Appealing to the new quantum theory of matter, Fr. Lemaître argued that the physical universe was initially a single particle—the ‘primeval atom’ as he called it—which disintegrated in an explosion, giving rise to space and time and the expansion of the universe that continues to this day. This idea marked the birth of what we now know as Big Bang cosmology.3 Father Georges Lemaître is not only a father of the Church but also the father of the BIG BANG THEORY!

In the beginning, when God created the heavens and the earth and the earth was without form or shape, with darkness over the abyss and a mighty wind sweeping over the waters (Genesis 1:1-2). Well-played father! Fr. Lemaître died in 1966 at the age of 71. He was only one of many priests proving the awesomeness of God through science. His accomplishments are worth reading. Check out the references, you’ll have a cosmic experience! 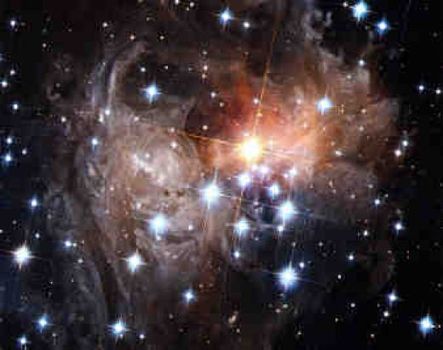